HSBC will sponsor the renewal and renovation of Ecobici, the shared bike system.

Shared bike-rides are getting more and more popular in urban centers all over the world because of their environment and social benefits they bring to the table. Mexico City’s not the exception, remaining at the storefront thanks to Ecobici’s growth and renewal in cooperation with HSBC.

A renewal for HSBC project

This means of transportation revamp began this year in cooperation with Grupo Expansión. HSBC Mexico will be part of this renewal and scale-up via a sponsorship. The HSBC brand’s hexagon will be a decal in the new black-colored bikes and gradually will substitute the old, red bikes in circulation since 2010, when Ecobici started operations.

HSBC’s sponsorship of the Ecobici renewal was announced by Jorge Arce, president and CEO of HSBC Mexico; Edgar Farah, president of Grupo Expansión and Andrés Lajous, secretary of Mobility of Mexico City (Semovi), who coincided in highlighting the benefits that will derive from the expansion and improvement of this sustainable mobility system in the city.

Besides, this sponsorship, the largest in LATAM, is in line with HSBC’s global strategy dedicated to lowering the carbon footprint in their direct operations and financing and supporting companies in this Eco-Friendly transition.

“Ecobici’s a cornerstone transport system for HSBC’s strategy worldwide because it lowers its carbon footprint and helps the environment. We will be part of this sustainable mobility project, at least until 2028, and will reduce up to 8,000 CO2 tons.” Arce stated.

The modernization strategy will favor user’s health and economy and represents the first sponsorship the bank is promoting in a shared bike system in the world, the executive added.

With these improvements, Ecobici will extend its service areas in Benito Juárez, Cuauhtémoc, Miguel Hidalgo municipalities and will arrive to Álvaro Obregón, Azcapotzalco and Coyoacán municipalities with a $1,300 million MXN investment.

The company 5M2, a Grupo Expansion company and BKT Bicipública are behind this process after winning the bidding. Edgar Fara highlighted the number of trips that the system already has; according to data from Ecobici, more than 74 million trips have been completed since 2010.

HSBC awards the leading companies in Sustainable Innovation, social, environmental and governance strategies of six companies and one foundation were distinguished for the positive impact they have on society and the planet.

“We’re talking about a scalable project that will add more than 9,000 bikes and 207 new stations for a total of 687 in 118 neighborhoods in six municipalities.” Farah stated.

This network will have new units and stations. Bikes will use wider tires and the seat could adapt to the user’s height for more comfort and will add an easy to operate gearshift.

At the same time, the stations will be modified with a lighter anchoring for pick-up and parking. The Access will be via the Integrated Mobility Card from Ecobici or the aa via a QR Scan.

These stations will be strategically placed for users to connect with 37 stations of the Sistema de Transporte Colectivo (Metro); 64 Metrobús stations, 5 Trolebús lines and 6 lanes on the Red de Transporte de Pasajeros’ buses.

The head of Semovi declared that bikes are a Zero Emission active means of transportation, meaning that they could improve its user’s health.

“Bikes are a fundamental part of the Public Transport System as an individual means par excellence” Lajous stated.

He added that users can travel up to 2 miles on bike to reach another connection such as Metro or to commute to their workplace.

On the other hand, Farah explained that the investment for these enhancements and expansion on Mexico City could match the infrastructure of the main European cities and such of NYC, Chicago, San Francisco, Denver, Washington D.C. or Los Angeles in the US.

Finally, to officially launch these Ecobici new units, Raúl Alcalá, cyclist and Olympic athlete, was in charge of traveling the first kilometer in the new black bikes with HSBC’s emblem. 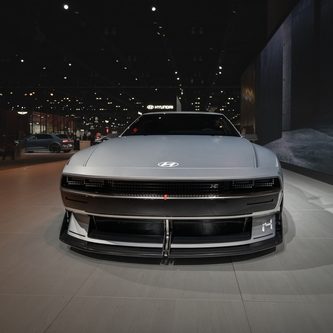 Next articleN Vision 74, an electric Sports car that came from the 1970’s